I received this book from Net Galley in exchange for an honest review. 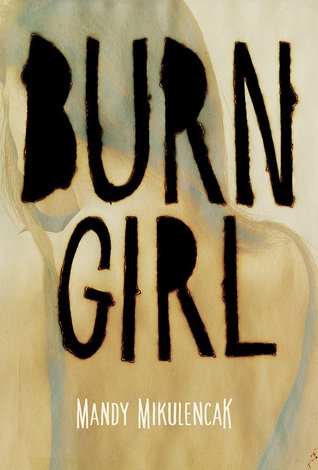 Burn Girl by Mandy Mikulencak is the story of a girl named Arlie whose face is left scarred and she loses her ability to taste and smell things after a meth lab explosion when she was 7. Her mother is a meth addict and together they have spent their lives moving from motel to motel on the run from the police. But after her mom dies under mysterious circumstances, she is thrown into a life of high school, a guardian uncle, court appointed therapy and worrying about popular girls and the cute blind guy who may or may not like her. When her stepfather finds her to get some money back, a life she’d been building is suddenly threatened forcing her into a situation that tests how far she will go to protect her newfound life.

This book was interesting for me because I haven’t read too many books about facial disfiguration and its implications but having a facial disfiguration myself allowed me to be able to relate to what the character was feeling. Arlie was fairly complex and maybe a little crazy because of the life she’d been living with her mother. What I didn’t understand was that she could have gone to the police or child protective services to get away from that life but from what I’ve learnt in life, family trumps everything. Anyway, I did enjoy her interactions with her uncle, her best friend Mo and Dora. There was a fair amount from all characters in the book so, the balance was quite enjoyable.

Despite the seriousness of the story, there were times when I was laughing out loud quite a few times. Well done for incorporating humor where it looks like there would be none. The one thing that was difficult for me to get was the pacing. The build in the beginning is fairly slow but it has points where you can’t put it down. There were some things that I felt were a tad excessive like Lloyd going after Frank and him being put into the hospital. I feel like it would’ve been one thing that could be avoided without causing much of a change in the story.

Another aspect that I didn’t like was that Cody was blind. I understand that the popular guy going for the nerdy scarred girl trope has been used many a time in TV shows, books and movies alike but changing that aspect and making the guy blind did not make sense. It’s not that I didn’t like it but it’s that a person would like their partner to see the scar and not be horrified. He’s blind, he can only feel it but the fact that a person who can see the scar and is not repulsed is more important to the person. It’s just an observation from reality that’s all.

Despite these things, I still feel it is a well written and enjoyable book. I loved Mo in all her best friend/ motherliness. I do wish we had seen more of Dora because she did have a big role to play in Arlie’s Previous Life and it would’ve been nice to see her have some part in the new one as well.