In an attempt to read a classic, I picked up Animal Farm by George Orwell. Most people read his books during school but I didn’t get that opportunity and my friend had gifted me a copy a few months ago, so I decided to read it.

Animal Farm is an allegorical and dystopian novella that represents the events leading up to the Russian Revolution and then Stalin’s era. I was somewhat aware that it was a sort of satire and related to Stalin but went in blind. 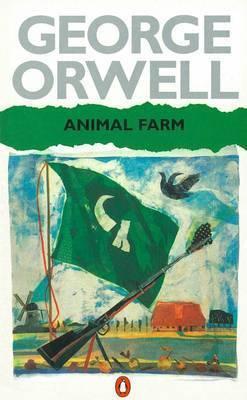 The main tag line for the book is- “All animals are equal but some are more equal than others.” This became quite evident toward the end of the book. The more intelligent way of reviewing this book would be to draw comparisons and parallels between the actual events and what was depicted but I am fairly lazy and not in the mood to be intellectual.

I did not enjoy this book too much. In fact there were moments where I wanted to put it down or burn it. The idea that pigs are smarter than many animals was just not possible for me to digest. (This review is going to be terrible I can feel it.) The excess work ethic, using other animals, denouncing something and then doing the same thing was just too much. I know that that happens in most political situations and revolutions but to put it this way just made me terribly sad for the animals. I have never hated pigs more and makes me want to consume as much bacon as possible (unless it’s Piglet, don’t hurt that sweetie).

As far as classics go, this was a bad choice for me. It was not a good Orwell experience and I don’t think I will be picking up a classic unless it’s Jane Austen or something.